The College has a close and cooperative leadership style in which staff and students work with an eye to the common good, supported by the College Council and our distinguished Fellows 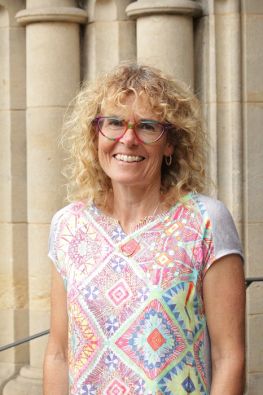 The Interim Principal is responsible for the day-to-day leadership of the College in all its aspects.

served previously as Warden of Whitley College for twelve years and Chair of the Melbourne Heads of Colleges from 2015 to 2016.  A Registered Psychologist, she has extensive leadership and pastoral expertise, including through previous work as a school pyschologist.

Ms Welsford lives at Janet Clarke Hall with her husband, Reverend Nathan Nettleton, their daughter Acacia who is a student at the University of Melbourne and two dogs, Dusty and Delta. Ms Welsford enjoys walking, running, singing and reading.

Our College is situated on the land of the Wurundjeri people of the Kulin Nation, whose stories, educational practices and connection to Country are part of the world’s oldest living culture.  We acknowledge the traditional custodians of this land, and pay our respects to Elders past, present and those emerging in our community.