As The University of Melbourne’s former Vice Chancellor has noted, Janet Clarke Hall holds ‘an enviable reputation for academic achievement and social awareness that will stay with its graduates for life’. The College’s vision, that as a leading academic college it will provide a supportive and intellectual environment for students, builds upon the founding vision that women would find a supportive space within the University.

The first four students were all provided with scholarships, as the College has sought from its inception to make its collegiate education possible through scholarship or bursary. Janet Clarke Hall is committed to continue fulfilling its role as a leading college within the University, and to providing the best possible environment for students from around Australia and the world to benefit from a Melbourne education 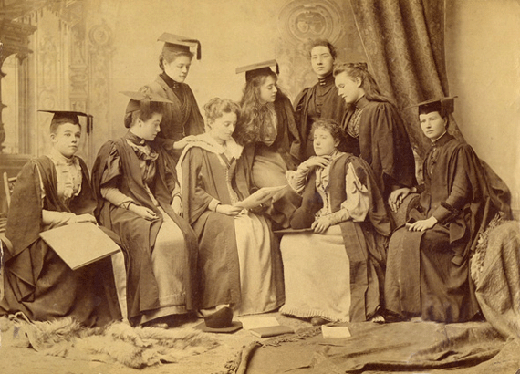 Discover more with our interactive timeline below:

1886 | Dr Alexander Leeper, first Warden of Trinity College, admits the first four resident women to the Trinity College Hostel, at ‘Trinity Terrace’ on Royal Parade. The Rev’d T. Jollie Smith appointed first Principal. He noted that Hostel should ‘approximate as closely as possible to the tone and status of a University College’.

1888 | Miss Lucy Waltham appointed Principal. Issues under her care include safe carriage of students to and from lectures, and rules surrounding admittance of men to the Hostel. Ladies’ Council (including Janet, Lady Clarke) established ‘to assist in the management of the Hostel’. Janet, Lady Clarke offers £5,000 towards the building of a permanent house of residence. Mathew Davies offers £2,000. Land allocated on the Trinity site ‘next to the present Tradesmen’s Avenue’. 1889 Emily Eddes appointed Principal. Charles D’Ebro appointed architect for new building.

1890 | Foundation stone of new building laid as University holiday granted to mark the occasion. Emily Hensley appointed Principal, to supervise ‘the religious,moral and intellectual advancement of the Students who will be under your influence’.

1891 | New building formally opened by Governor, Lord Hopetoun, on 15 April. Miss Hensley speaks of it as ‘a credit to the name of all Australian women’. Ladies’ Council submits series of proposals and seeks ‘recognised status’ from Trinity College Council.

1927 | Manifold Wing, gift of W.T. Manifold opens. Gift made conditional upon requirement for students to 'enter upon and prosecute to the end a course of study, having for its object the obtaining of a diploma or certificate in domestic economy and cooking'

1930 | Traill Wing Opens, with balconies for students to sleep out and shared studies.

1938 | Pedestrian Gate (Christopher Furness Gate) dedicated, having been recovered from the garden of Bishopscourt after removal by ‘Trinity men’ the night before.

1962 | Lilian Scantlebury Wing Opens with support from Federal and State funding, named in honour of the long serving Chairman of JCH Committee (from 1939-1961).

2009 | JCH aluma and Fellow, Dr Elizabeth Blackburn, is the first Australian woman to be awarded the Nobel Prize.

2012 | JCH aluma, Marita Cheng, is Young Australian of the Year.